I ordered these because of the gorgeous blue gold combo only to be let down and receive normal tiger eye plugs.... which had I know thats what was coming I wouldn't have ordered 2 of the same stone... i bought a set of normal tiger eye tunnels and saw these and had to add them as well just to get the same exact stone with no color difference like it suggests... I do enjoy these with no other complaint outside of this photo is quite misleading... 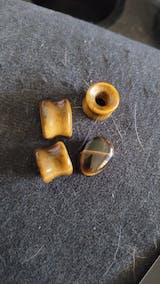 J
Jen Howell
Pretty, but look nothing like the photo

I know what tiger eye looks like, so when I saw the photo of these ones I got a little excited because they looked different than the standard, so I thought it would be a different type of tiger eye.. unfortunately they aren't, and I got the standard tiger eye that doesn't look like the photo. They are beautiful though. I have no true complaints other than I was hoping the colors would match more to the photo than the standard tiger eye. It took longer to receive these because initially they sent me the wrong set of plugs, but they were very kind and immediately fixed the issue and sent out the correct pair and I was allowed to keep the ones they originally sent. Overall I am happy with these, just a little disappointed that they don't have the same colors as the photo depicted. I would definitely buy more from plug crate though. :) 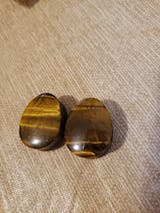 Nice, just like photo, amythyst stone plugs...not so much

These plugs are so nice! Amazing quality, perfect fit and the shape is so cool! I highly recommend